Hi Managers,
The Asian Tour Challenge is Live Now! It is giving a good opportunity to collect exciting rewards!
The format of the challenge is not new as the developers have introduced similar events in past too on many occasions. We all remember Spain Tour, UK Tour, France tour in the past and those were pretty tough events to complete as you had to face monster opponents during the later rounds of those tours. But GOOD NEWS for the managers! This time as this Asian Tour challenge is quite easier in terms of the opponent’s quality.
But before joining the Event I suggest you to go through the Rules! (Specially for the new managers) 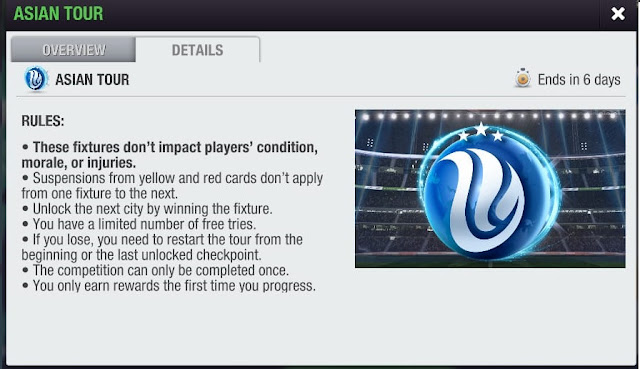 How to approach !!
So as you can see from the rules above, there are twelve opponents in the Tour with increasing quality as you proceed forward. There are checkpoints which means if you lose a match at some point in the tour, you have to start from the last checkpoint that you have reached. 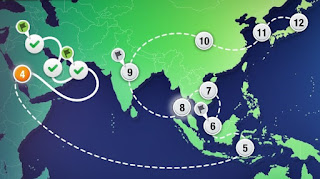 In the previous tours, the managers had to face teams with 50%+ more quality than your’s during the later stages. but this time we have seen the Final opponent is quite easier in terms of quality. We have seen the quality of the team from the last match, i.e. the 12th match of the tour (Kawasaki Blue) only around 10% more than your team or if you are lucky than even 10% lower than your team.
But again, don’t underestimate the teams even though the qualities are comparatively lower. Because their gameplay is quite good. So plan properly against your opponent because there are only 2 free entries to the Event if you lose again and again. After the free entries, you have to pay tokens to re-enter the event and the number of tokens needed to enter will increase if you lose further. So prepare every match as if they are “do or die” match for you. If you are new to the game you might refer to this link for better preparation against your opponent considering their formations which generally works most of the time.

Well although Nordeus has been kind this time with a comparatively easier challenge they didn’t compromise on rewards accordingly. The rewards are amazing. You will get the following things as a reward if you finish the whole tour:
A. 136 Tokens!!

E. One Jersey (Which is cool!)

So that is a very good deal of rewards for me. I am suggesting the managers not to waste time and complete the Tour as soon as possible. because who knows Norddeus might increase the difficulty level later.
So, GO FOR IT!! AND GOOD LUCK !!!