Image Source
While playing Top Eleven we can’t deny that Rest Packs (Green Booster) are the most important boosters among the three available boosters. We need Rest Packs for mainly two reasons in the game.
1. To train players to gain skills
2. To maintain a high condition level of the players while playing the match


Although it’s important to train players using rests, it can be seen that many generally ignore the second point and invest all the rests packs to train players. But a high-level condition of players is necessary to get a satisfactory result. It is always recommended to start a match with at least 80% (with the green bar) energy level (90% is healthy situation), especially for important matches to bring out the best of your players.

However, TE is not offering us enough green boosters or Rest Packs but many of you will be surprised to see the amount of rests packs you can collect in a full season (28 days).
The Calculation I am going to show you is an ideal case but if you are an active player and have a good Association you can collect up to 90% or more. The calculation is as follows
No. of League Matches > = 26
No. Champions League Matches > = 13
No. Cup Matches > = 11
No. association Matches > = 16
(Friendlies are excluded)
————————————————-
Maximum no. rest packs form matches = 50
For 1st/winner position  > 5 rests x 4 tournament = 20
So if we add all those the maximum no. of rest packs we can get are = 878

However, these factors count hardly around 100, means you can still get 750+ rests without any worries. 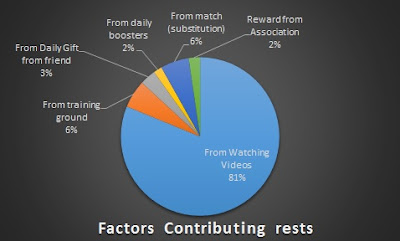 So from the analysis, you can see the major portion of the available rests is constituted by watching videos (around 81%). So if you are really passionate about collecting rests then try to watch 25 videos every day.

Let us know if you have trouble to understand the calculations. We will try our best to help you.