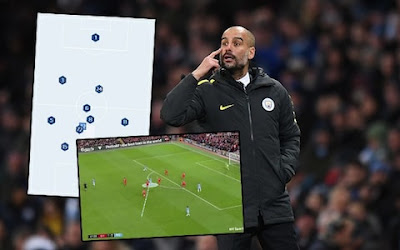 Changing tactics during a match is something every soccer manager needs to consider while facing smart opposition. Many teams in the present world like Manchester Utd, Atletico Madrid constantly change their tactics depending on the situation of the on-going match and there is no need to describe how successful these clubs are.

In Top Eleven too, changing of tactics is very important and the developers of the game that it has provided us the necessary flexibility that is required to change the playing approach. No matter how strong is your opponent, changing tactics can help you in different ways. Suppose you are weaker than the opponent and giving up hopes; then remember, with proper tactics and formation you can beat your opponent. Although while facing teams more than 20% stronger than you, you need some luck as well!

Basically, tactical changes mean switching the playing approach like a transition from attack to defense, defense to attack or keeping the possession. Again going to tactics tab and just changing the “Team Mentality” to “Hard Attacking” to “Hard Defensive” doesn’t give the effective result. Proper combinations among “formation”, “Focus Passing”, “Passing Style”, “Marking style” etc. are very important. Again you must have the necessary players in your squad for an effective transition between attacking and defensive play. (To know how to build a perfect squad click here). Again selecting suitable formation according to opponent’s formation is also very important. (To know about how to choose effective formation in Top Eleven click here) In this article, I’ll discuss how to change the tactics to achieve attacking play, possession play, and defensive play in Top Eleven. (To know in which situations you need to switch the style of play click here.)

Switch to attacking approach means you want to score more goals for different reasons. For changing to attacking mentality you need to follow the steps as depicted below.
Step I: Formation:

For switching to effective attacking play you should have minimum 6 players above the blue line and at least 3 players above red line as shown in the figure below. So you may need to use substitution if you don’t have players in those areas. If you have MR, ML, and AMC; use up arrow on them. (To learn about the effective use of arrows, click here ). 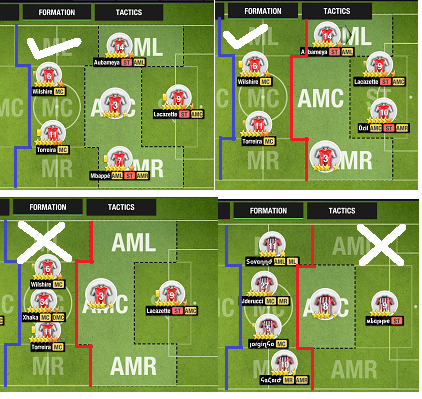 Step II: Switching Team mentality
After setting up the formation you need to change the mentality on the mentality tab on tactics tab. There you will find options like “hard attacking” “attacking”, “normal” etc. Now you have to choose the “attacking” option as from various reviews and from personal experience, I have seen “hard attacking” has a negative impact on the team. Now most managers make mistake in the next step where they forget to change the remaining tactics. The combinations of remaining tactics that assist attacking play are:
a)  Focus Passing: “Mixed” or “through the middle” depending on the formation. Use “through the middle” only if you don’t have wide players (ML, MR, AML, AMR)
b)     Passing style: Mixed
c)      Force Counterattacks: off
d)      Pressing style: High
e)     Tackling style: Normal
f)       Marking style: Zonal
g)      Play offside trap: On
One example is shown in the figure below: 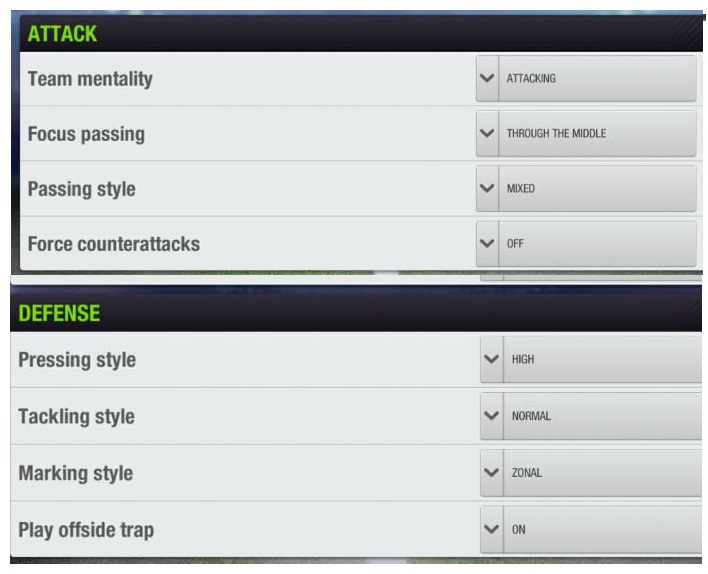 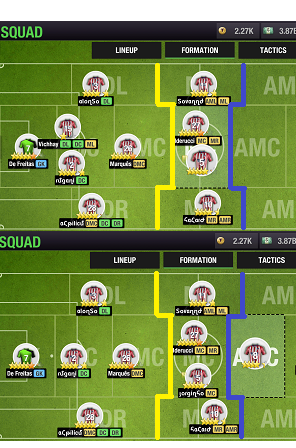 Step II: Switching Team mentality
This time on the tactics tab you have to choose the “defensive” option (hard defensive has a negative impact). The combinations of remaining tactics that assist defensive play are:
a)      Focus Passing: Mixed. If you have wide players you can use “Down both flanks”,“ Right Flanks” or “Left Flanks”
b)      Passing style: short
c)   Force Counterattacks: off (More safe option), “On” only if a goal from your team will make the situation better
d)      Pressing style: low
e)      Tackling style: Normal
f)       Marking style: Man to Man
g)      Play offside trap: off
One example is shown in the figure below: 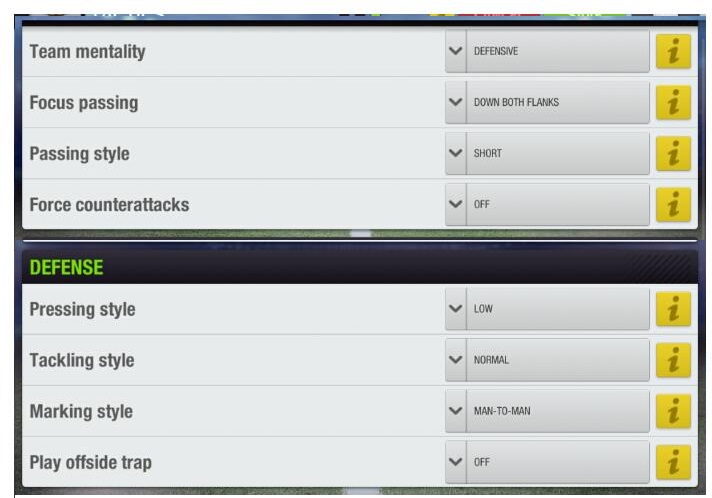 Here you want to keep the ball away from the opposition. But when the opponent is stronger than you this tactic is not recommended. To apply this tactic you need to follow the steps as depicted below.
Step I: Formation:
You should have at least 5 players in the highlighted area. Don’t use arrows on the players in that area. 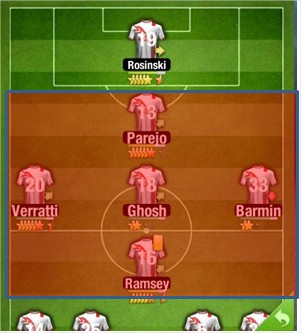 Step II: Switching Team mentality
a)      Mentality: Normal or defense
b)      Focus Passing: mixed. If you have wide players you can use “Down both flanks”,“ Right Flanks” or “Left Flanks”
c)       Passing style: short
d)      Force Counterattacks: on
e)      Pressing style: high
f)       Tackling style: Normal
g)      Marking style: zonal
h)      Play offside trap: off
Let us know if the article was helpful or not and feel free to ask if you have doubt about anything. We will appreciate your valuable feedback.