Top Eleven is one of the most popular games on the Google Play store and iOS store. To become a good player in this popular title we need to know a few in-depth tricks and tips about this game. Here in this article, I’m going to share a basic guide you need to know about the player’s age and growth which is a very important thing to do good in Top Eleven! 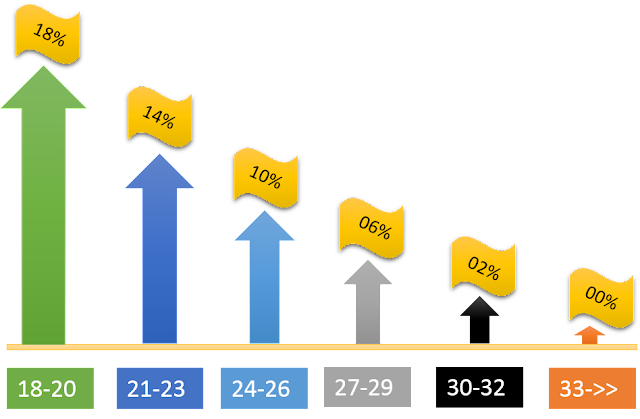 The more seasons he plays the more experienced he becomes. We all know this logic from our real life but Top Eleven has some other ideas. It’s true that a player becomes more experienced with his age, albeit his growth rate decreases with increasing age. let’s see how experience and growth rate intercept each-other and influence a player’s career.
Experience: When a player joins the senior team or when you buy a player from the market you might have noticed rectangular boxes with two colors intensity, i) Highlighted (White) & ii) Fainted (Gray).

Meanwhile, you need to be aware of the fact that a newly signed player from the market is not an experienced player irrespective of his age. His experience level only increases when he is at the same club.

Growth Rate: Growth of a player is highly dependent upon his age. It has been noticed (from experimental results) that an 18yrs player has the highest rate of growth and 32 years has the lowest. Growth rate even becomes negative (-ve) afterward.

We have run the experiment on a group of player for several seasons and the result we have found are depicted in the following table.

It is very clear from the above table that the youngest players have the highest range of growth, which is around 16% to 20%. 21 years to 23 years (they are also considered as the young player by Top Eleven) have a moderate range of growth which is 12% to 16%.

30 yrs to 32 yrs players do not have a significant amount of growth, it’s around 1% to 3% and 33yrs and above players start thinking about hanging their boots so they don’t increase at all and might even decrease some time.

So, before buying a player you need to decide, what is your first preference, experience team or a faster-growing team. Our suggestion is to buy 2/3 very young players every season and making them experienced. With this continuous process, your team will have a perfect balance of Age & Experience.
Is that helpful? or, Do you have any more suggestions to the community? Let us know in the comments below!