Frustrated of being losing to a much stronger team form upper level in CL and Cup tournament in Top Eleven? This article might help you getting a result against them.

While playing Top Eleven we often face a very highly rated team and we end up losing the match or our Cup/CL run ends there. Almost every manager faces this kind of stronger opponents and most of the managers end up losing season after season. Now the question is is there a way to beat or at least get a point from the stronger teams?

The answer is YES! Look in real life example, like in the English Premier League, where there are many numbers of occasions where a bottom table team often beat the top table team and thus they are labeled as giant killers. The same way it is possible in Top Eleven too. You can easily make a draw or win against the potential champion. It’s no miracle. All you need to have a clever approach to the game.

Let’s consider your opponent is starting the match as the favorite (Giant) and you have to stop him anyway. What should you do in this situation? What should be your formation and tactics? In this Article, I will discuss everything step by step.


Scouting: Your very first task will be to scout the opponent, by checking out the previous matches of your opponent in Cup / Champions League log. Then analyze his/her formation or player distribution on the pitch and where are the strong players? at the flanks or at the middle?

Asking Support: The Next thing you can do is to ask your friends for support. Playing with 15% Support is a big advantage and has a great impact on match result. So, ask as many friends you can to attend the match and support you. This set consists of 3 wide defenders and 2 central defensive midfielders. Holding/Defensive Midfielder is known as Destroyer. So, when you have two DMCs in the field it will surely serve you with better interceptions. Additionally, the midfielders [ ML/MC/MR] will also support them according to the team mentality. This set consists of 3 narrow defenders and 2 wide defenders (advanced) in defensive half. Your flank players will destroy the opponent’s flank attack. Therefore these formations are good against wing/ flank attacks. 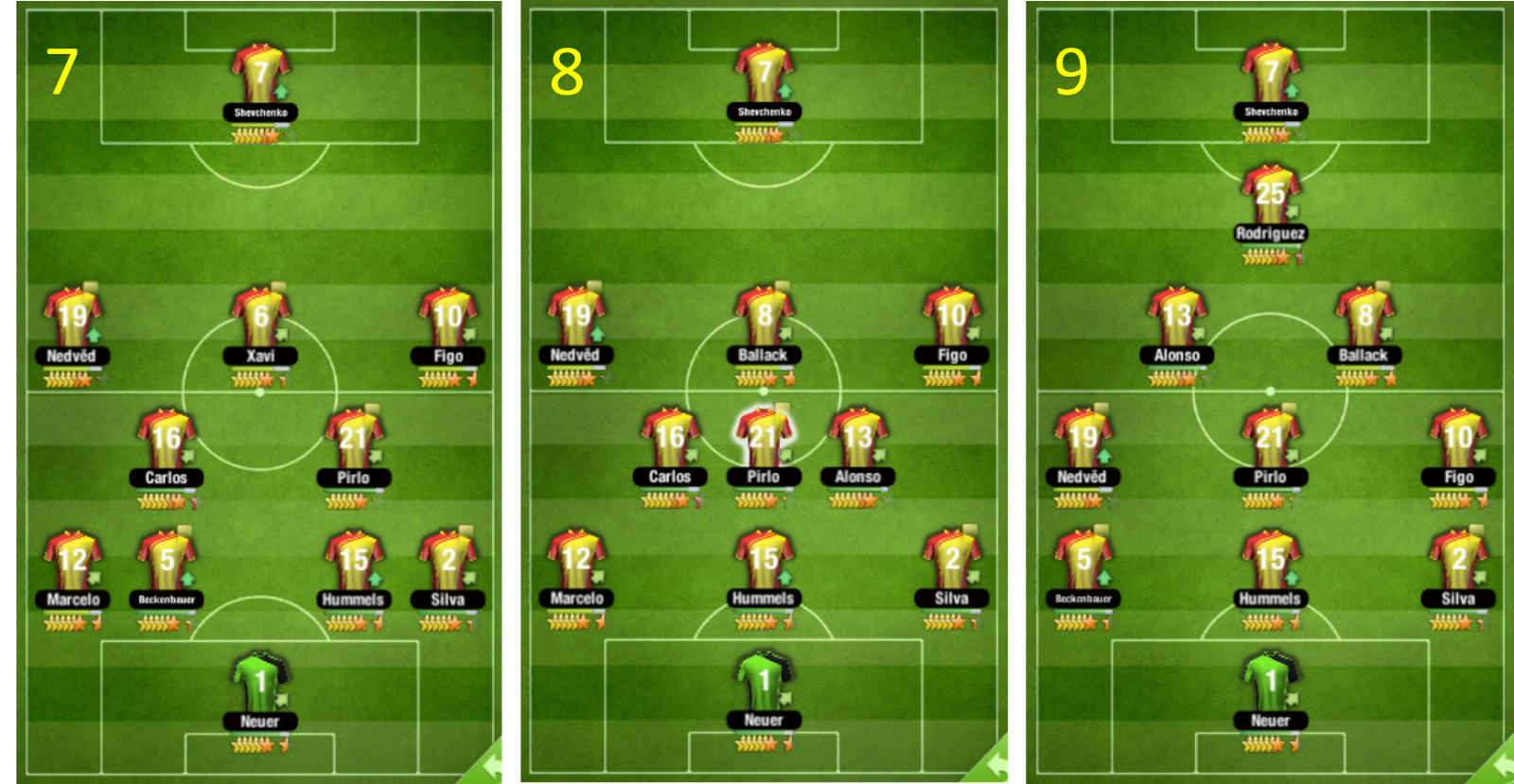 This is a miscellaneous set, no such special trend is followed here. But this set is good when you can’t catch the opponent’s tactics.
SET IV
Apart from these, 4-1-4-0-1 and 5C-2N-2W-1 (Butterfly) are also good defensive formation to stop the opponents.
Deciding Tactics:  As we have already considered our opponent as a favorite and we are starting as an underdog. Therefore we have to step into the field accordingly. Our one and only purpose is to kill the Giant, doesn’t matter how & we have to get this job done anyway. All we need just one goal in favor of us. The Tactics should be some thing like this (as follows)
ATTACK
Team Mentality: Defensive
Fous Passing: Mixed/ Down Both Flanks
Passing Style: Short
Force Counter Attack: OFF

DEFENSE
Pressing Style: High
Trackling Style: Normal
Marking Style: Man-to-Man
Play Offside Trap: ON
Assigning The Arrows: You can Even assign arrows (UP/DOWN) to your players to make the defense more compact and to get a better hold on the game. It’s better to assign arrows after watching the situation of the match. For example, if you notice the wing players are going past to the corners and delivering the ball to the Strikers frequently, then you may assign DOWN arrow to you ML/MR. To read more about assigning arrows Click Here.

The above-mentioned formations with this tactics are literally meant “Parking BUS” in the field. The opponent will struggle to get it pass through. At this situation only two things we can control i) Individual brilliance of a players ii) Set piece/ Dead ball. which is dependent on our luck.

We hope this Article will Help you to get some suitable result at unfavorable situation during the season and may also lead you to win trophies.

Feel free to comment below. We are waiting for your valuable feedback. And also let us know if you have some other ideas.